Veere, one of the oldest harbour towns in the Netherlands, has been named Heat Pump City of the Year 2018 by the European Heat Pump Association thanks to its use of the TripleAqua heat pump to provide heating and air conditioning in its town hall.

“Everyone involved is very proud that this project won Veere the Heat Pump City of the Year award,” Menno van der Hoff of TripleAqua Licensing Ltd. told hydrocarbons21.com in an exclusive interview.

“It serves as an example that for building renovations, natural refrigerant-based heat pumps can give amazing savings on fossil fuel consumption and help to decarbonise buildings, which are responsible for the majority of world CO2 emissions,” Van der Hoff said.

The Heat Pump City of the Year is an EHPA scheme that aims to recognise Europe’s most efficient, smart and sustainable heat pump project.

The TripleAqua system in Veere employs the hydrocarbon propane (R290), a natural refrigerant with a global warming potential (GWP) of three.

“This serves as an example that for building renovations, natural refrigerant-based heat pumps can give amazing savings on fossil fuel consumption and help to decarbonise buildings.”

The TripleAqua has the ability to store heat and cold in buffers for later use in the building, providing heating and cooling simultaneously or individually. It uses three rather than the customary four water-loop pipes to distribute heat and cold, and to return water at ambient temperature.

Van der Hoff explained that the TripleAqua had saved Veere around 20,000 euros a year, partly by eliminating the need for natural gas-based boilers.

“This shows that refurbishment projects can use natural refrigerant-based heat pumps to save 73% on primary energy consumption – that’s an amazing figure,” said Van der Hoff.

“I’m happy that the jury unanimously accredited this project with the award,” he added.

In 2017, Veere became the first town in the Netherlands to stop using natural gas, with consumption falling to zero last year from a figure of 24,444m3 per annum in 2016. The town hall became the first in the country to divest itself from natural gas completely.

In the town hall, the TripleAqua heats an area of 4,060m2 and cools an area of 3,340m2 via three water pipes (warm pipe, cold pipe and the return pipe).

Switching to the TripleAqua reduced the town hall’s HVAC energy consumption without requiring any changes to the building. All the existing heating and cooling pipework was simply reused.

“The beauty of it is that we left the building untouched,” said Van der Hoff.

The town hall’s previous HVAC setup used over 100 kg of R407C, an HFC with a GWP of 1,774. The building employed separate heating and air conditioning systems.

Asked whether Veere town hall could serve as an inspiration for other public authorities, Van der Hoff said, “yes, if a public building is in need of heating and cooling, and wants to move from using natural gas to a heat pump solution”. 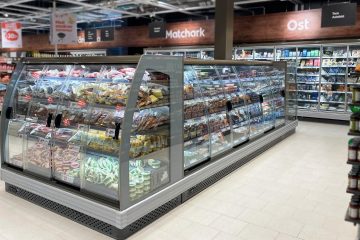