Brazilian manufacturer Embraco, part of Nidec Global Appliance, has introduced a new generation of its EMX, NTX, NJX and NEX propane (R290) compressor families for the North American market. Except for the EMX, they are all ready for the upcoming increase in the hydrocarbon charge limits approved by UL.

The new version of the four Embraco R290 compressor families is called Generation X. All X models have been updated for increased energy efficiency and extended cooling capacities. The updated versions also comply with the upcoming energy-efficiency regulations for the commercial sector, Embraco said in a statement.

“This is part of our strategy to keep investing in future-proof solutions, but always keeping our legacy products for the existing refrigerants,” said Michel Moreira, Sales Director at Nidec Global Appliance.

The updated NTX, NJX and NEX propane (R290) compressor families can handle charge increases up to 500g [17.6 oz] in open cabinets and to 300g [10.6 oz] in closed ones. “The new UL standard on the subject was recently published, but before the new charge limits [can] be implemented in the U.S. they first need the EPA SNAP approval as well as require Ashrae 15 Standard and Building Codes update,” Embraco said.

The four R290 compressor platforms have been launched in the North American market over the last couple of years. The NEX and NTX launched at the end of 2020 and the NJX in the first part of 2021. Finally the EMX HST became commercially available to customers at the end of 2021.

The EMX HST is the third generation of the EM R290 compressor family. A new feature is a high starting torque making the EMX HST suitable for applications that require a “robust compressor, capable of starting in situations of high thermal load, like constant door openings and frequent product reload,” Embraco explained.

The high starting torque makes it perfect for applications such as bottle coolers, beer merchandisers, under-counters and professional kitchen’s reach-in freezers and coolers. The EMX has a range of displacement from 4cc to 9.5cc.

“The X Generation is differentiated by its higher level of robustness, compared to previous generations, dealing even better with severe application conditions, such as constant door openings and high ambient temperature,” Moreira said. It also has “an even better balance between energy efficiency and food preservation, to address the respective product requirements,” he added.

NEX is the fourth generation of the NE family designed for food service applications and “known for its high robustness and low noise levels.” The NEX has improved energy efficiency,  up to 10% in low temperature applications, and a larger cooling capacity. The maximum displacement has been increased from 18.7cc to 21cc.

The NTX R290 compressor has been developed to address the increasing demand for high energy efficiency and low noise levels in commercial refrigeration equipment like ice machines and multi deck reach-ins. Embraco has increased the maximum displacement in the NTX by 18% from 27.8cc to 33cc.

The new NJX has a single piston compressor, which can now reach up to 2HP, making it a good solution for food retail applications with height restrictions, Embrace explained. The NJX also has increased displacement, in this case by 11.7% from 34cc to 38cc. The NJX “stands out for its high efficiency, low noise, robustness and reliability, with a compact and competitive design.” 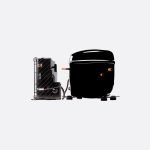