In another example of the growing interest in CO2 refrigeration in the industrial sector, Heatcraft Worldwide Refrigeration plans to install its first transcritical CO2 system at a new cold-storage facility later this year.

The facility operator opted for CO2 transcritical rather than a traditional halocarbon DX solution, said Grady McAdams, director of cold storage sales for Heatcraft, in an interview at the Global Cold Chain Expo Tuesday in Chicago. He declined to name the company without its permission.

“They liked the idea of going green and not having any future issues,” he said.

Heatcraft is one of several manufacturers promoting CO2 transcritical refrigeration for industrial applications at the expo, including Carnot Refrigeration, Hillphoenix and Zero Zone.

Climate Pros, an Illinois-based contractor exhibiting at the expo, recently installed a CO2 transcritical system from Carnot at the MaMa LaRosa dough-making facility in Michigan.

“This is the tip of the iceberg,” said McAdams. “There’s going to be a lot more opportunity, and we want to play in this market.” Transcritical CO2 is best suited for small-to-medium industrial plants, he added.

Heatcraft has been receiving one or two inquiries per month about transcritical CO2 for industrial applications, said Ajit Kailasam, cold storage manager for Heatcraft, at the Global Cold Chain Expo.

“They liked the idea of going green and not having any future issues.” 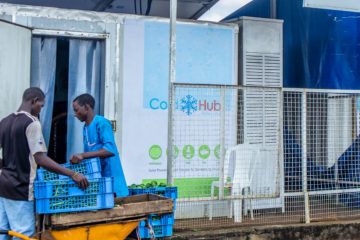