An inverter propane (R290) compressor can reduce the energy consumption of vending machines by up to 27% compared to a fixed-speed compressor, according to research conducted by Embraco, a Brazilian manufacturer and brand of Nidec Global Appliance.

The inverter technology, also known as a variable-speed compressor, saves energy by adjusting the device’s operation speed to meet the requirements of the refrigeration equipment rather than running at a single speed regardless of demand.

The case study, which focused on the Asian market, was presented by Xu Bo, Sales Manager for Southeast Asia at Embraco, during the State of the Industry session at the ATMOsphere APAC Summit 2022. The conference, which took place June 27–28 in Tokyo, was organized by ATMOsphere, publisher of Hydrocarbons21.com.

According to Xu Bo’s presentation, the study was conducted to “evaluate alternative solutions to reduce the energy consumption for the vending machine and apply [a hydrocarbon] solution to comply with regional requirements.”

In addition to using an ultra-low-GWP natural refrigerant and reducing energy consumption from 6.93kWh per day to 5.07kWh per day, the inverter compressor also achieved the required internal cabinet temperature of less than 6°C (42.8°F) 15% faster than the fixed-speed model.

With these efficiency savings, the payback period for converting the vending machine to an inverter compressor is less than one year, according to the case study.

“It is an outstanding outcome not only from an environmental protection perspective but also from a financial one,” says Xu Bo. “It also guarantees an improved sales experience since the product reaches merchandising temperature quicker and can reduce product loss by allowing a more stable temperature inside the refrigerator, complying with the best practices of food safety regulations.”

The case study also analyzed the impact of additional improvements on the vending machine’s energy consumption.

By optimizing the door heater and replacing AC evaporator and condenser fans with DC fans, energy consumption was reduced by a further 26% to 3.75kWh per day. Energy consumption could be reduced by an additional 1% by blocking the vending machine’s beverage outlet to reduce heat leakage.

In total, energy consumption could be reduced by 47%.

“The compressor still accounts for the main opportunity for energy consumption reduction, covering several changes in different subsystems but, with combined actions, there is an extraordinary potential,” explained Xu Bo.

According to Embraco, the expanding vending machine market in China and Southeast Asia has required units to become more energy efficient to reduce operating costs and lower their environmental impacts.

“The refrigeration market is looking for new efficient technology that Embraco is happy to demonstrate that already exists”, said Xu Bo. “As an important influencer for sustainable refrigeration solutions, Embraco is driving the market to a more energy-efficient direction, and the variable speed compressor is an outstanding technology to reach it.”

“The refrigeration market is looking for new efficient technology that Embraco is happy to demonstrate that already exists.” 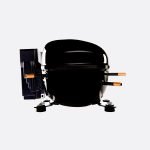